Community Can Help You Build a Killer App . . .

But Don’t Make This Mistake:

“The best content is other people” says Dmitri Williams in a recent op-ed article in the L.A. times, making a very good case about the importance of the social aspect in helping new games and platforms succeed. But for social features to work, they need to happen at the right time and place in your experience.

The most successful games of the last few years have all helped us connect socially: “World of Warcraft,” “League of Legends,” “Pokémon Go”. Creating a community not only brings new content but let’s you grow your game or platform organically; a vibrant community is a very strong attractor of new players. This is why it is so important for games and new platforms like Virtual Reality to figure out how to add social components. “Virtual Reality needs to be social to succeed,” also argues Signe Brewster in another great article making the case for social, but the importance of forming a community is not limited to VR: it is an essential ingredient to any game and app that is trying to engage people in the long-term. We are social animals. We like to feel connected to other people and feel part of something larger. The trick is that the features that will help you build a community need to come at the right time and place. Otherwise they won’t work.

A very common mistake that I see many developers make is underestimating the cost of social features. I am not talking about production and implementation costs, although that could also be expensive, but high costs from the player’s perspective: our social status is precious and we are very protective of it. Many games ask us to invite friends and post about the game in our social networks as soon as we finish a couple of levels. Do you do it? I doubt you do. I don’t.

The reason is because social interaction is expensive. Our social standing among our friends and family is precious; we are not willing to mess with it easily; even less for something that we don’t care much about. Most players are only willing to share things that they are committed to and believe will help their social status. They won’t share just because it is easy to do, or by giving them a cheap incentive. In a way we deal with these things in a similar way we deal with other things in life. We would not introduce a person we just met at a bar the night before to all our friends and family in Facebook, even if we had a good time at the bar. The same goes with your game, not many are willing to share after the first few sessions; you are better off focusing first on creating an experience that players will find worth sharing, and leaving the social aspect for later in the game experience. Once you are deeply invested in an experience you are much more willing to try to bring your friends along.

The same thing happens with multiplayer games like MMOs. Even if it is not about bringing external friends but about meeting players and making friends inside the game, most people rather play alone until they have mastered the basics of the game. Most people don’t want to appear as incompetent, even in front of strangers. So here too, you don’t want to introduce social features and social pressure too soon. This will also be the case for any social VR apps out there. Social is powerful, but to really thrive people need to feel safe. Social mechanics work better when you are already familiar with a space and its rules, when you already feel competent and confident. This is what successful MMOs do well. When we designed Disney’s Toontown Online, we pushed players to make friends with other players in specific missions, but those missions were only available after you were familiar with the world, and they provided very clear objectives that worked as ice-breakers. The reason it was easy to make friends and form a larger community is because you had a clear excuse -a mandate to connect- and the connection benefitted you and your new friends and made everybody more successful in the game.

In a previous article, The 4 Steps of Successful Games and VR Experiences, I talked about the steps of long-term engagement: stand out-connect-engage-grow. First you need to stand out in the crowd of games and apps; then you need to connect emotionally to the players so they are willing to give your game a chance; then you need to find ways to keep them engaged; and only then you can bring the social aspect to help grow your product. Even in the case of MMOs where social interaction is key, it is better to limit and scaffold around the social aspects until your player feels like she has mastered the game enough to have a good social standing.

Before adding social mechanics somewhere in your game, ask your self a couple of questions to figure out if your player is ready for them:

Social features are very powerful, but they are also precious for most people. Adding social features too soon can backfire. Most players need to be fully engaged and feel comfortable before they are willing to interact with strangers or they are willing to bring their friends over to a new experience. I strongly believe that if you want to engage players in the long-term it is crucial that you include some community building features; but make sure you engage and make your player feel comfortable first.

The 5 Ingredients of Successful Games and VR Experiences 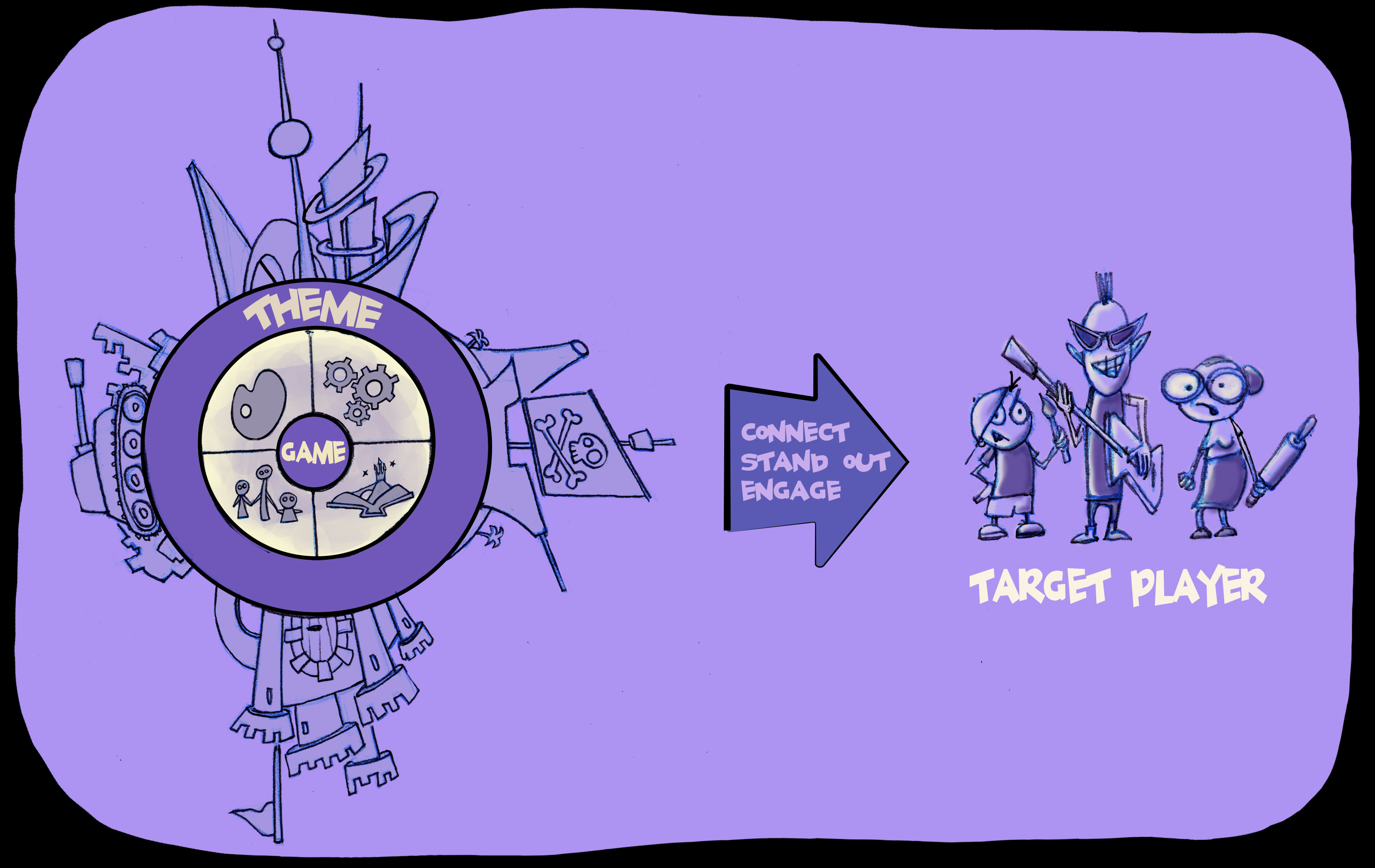 What makes a game successful depends on your goals, sometimes it is revenue, sometimes it is number of downloads, impact on your players, etc. However focusing on these outcomes is usually not very helpful as a developer, it is much more helpful to define success in terms of engagement because engagement can be linked directly to the kinds of decisions we need to make during development.

In a previous article I mentioned how engagement follows a 4-step sequence: stand out, connect, engage, and grow. The next step is to figure out what are the ingredients in a game that can help you do that. In this article I am going to talk about 5 ingredients that will help your game or VR experience be more engaging in the long-term. 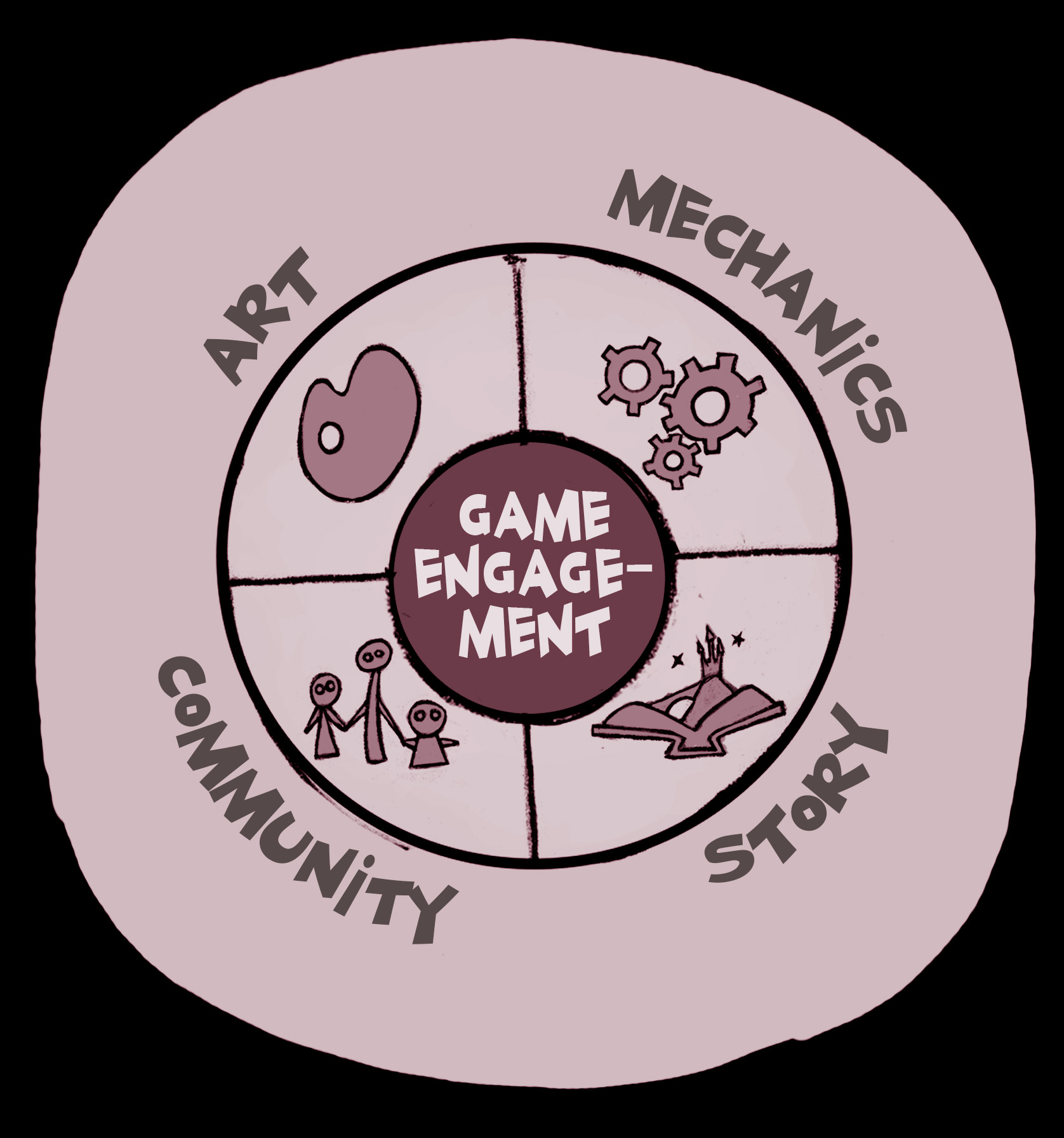 In the many years I spent developing MMOs for casual gamers – kids and families- I saw how there are four basic elements that can be combined very effectively to get the attention of players and have them stick around: art, fun mechanics, story, and community building:

All these four elements are important to create a successful game that follows the sequence stand out-connect-engage-grow, but some are more important for one step and some are important for others: standing out depends much more on the art and how things look like than on the details of the story, but engagement depends much more on the mechanics and story than the art, and growing depends heavily on the community building aspect. I’ve seen many good games that don’t succeed because they lacked one or more of these important elements.

It is also important to notice that most games, from free-to-play mobile games to VR experiences and educational games, will benefit from having all these ingredients. If you decide that you don’t need one of these ingredients, if you think don’t need a story or you don’t need community building mechanics, at least you should have a clear reason why not, and you should have an idea of how are you going to get your game to stand out, connect, engage, and grow with the ingredients you choose to include.

There are other elements in a game that are very important like monetization, which is essential to make the game development sustainable. Or marketing, which can help your game get noticed. But the part of marketing that I think is more essential is not the promotion itself, but defining and thinking about your target market, and getting feedback from your target players all through out the development process. Then, your art, mechanics, story and social mechanics will resonate with your players, and your marketing will be embedded into your other elements.

Power Up With a Theme 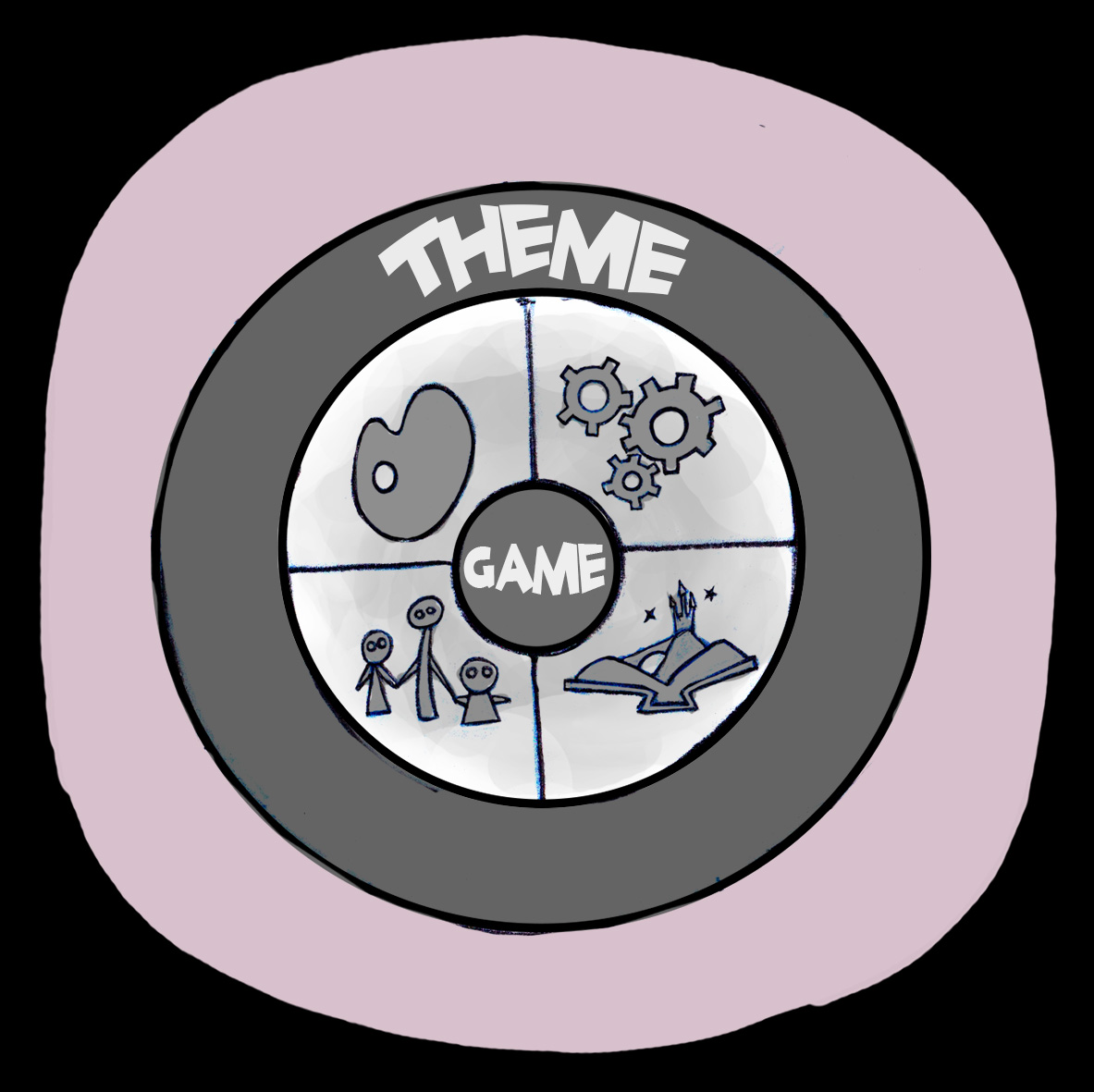 What I’ve noticed through the years is that games are much more powerful and effective at engaging players when all the elements mentioned above -art, mechanics, story, and social interaction- work together and reinforce each other. Having a strong “theme” will help tie together the elements of your game and will make much easier to connect emotionally with your players. But for a theme to do that, you need to have the right understanding of what a theme is. Theme is not topic. Saying you want to do a pirate game is not enough. There are many different potential approaches to a pirate game: is it about gathering treasure? Is it about fighting the law? Is it about ship battles? It is not about a conflict either. Defining your theme as the conflict between pirates and the Spanish Armada is not enough. You need to pick a side, you need to have an opinion about the topic or conflict you are talking about: ” A pirate life is a wonderful life, because it is more free and exciting.” When you state your theme as a clear point of view you get a much clearer idea of what mechanics and what stories you need. In this case, it all would need to revolve around the excitement of being a pirate and being free of responsibilities and commitments. In his book “The Art of Game Design,” Jesse Schell relates an example from when we worked on a pirate’s virtual reality ride for Walt Disney Imagineering and DisneyQuest. In his book he writes how as soon as we nailed down a theme for the ride, many of the design decisions about art style, game mechanics, story, and even technology became clear. As a result all these ingredients ended up supporting each other to create a much more powerful and award-winning VR experience.

There are 5 ingredients that in combination help your game be much more engaging and successful: art, mechanics, story, community, and theme. When you put those things together in a game or experience: art that resonates with your audience, mechanics that are fun and have clear goals, a story that adds meaning and context, a community makes you feel part of something larger than yourself, and a theme that ties it all together and connects to points of view that you resonate with, you get a much more engaging experience, and your chances of success grow exponentially.